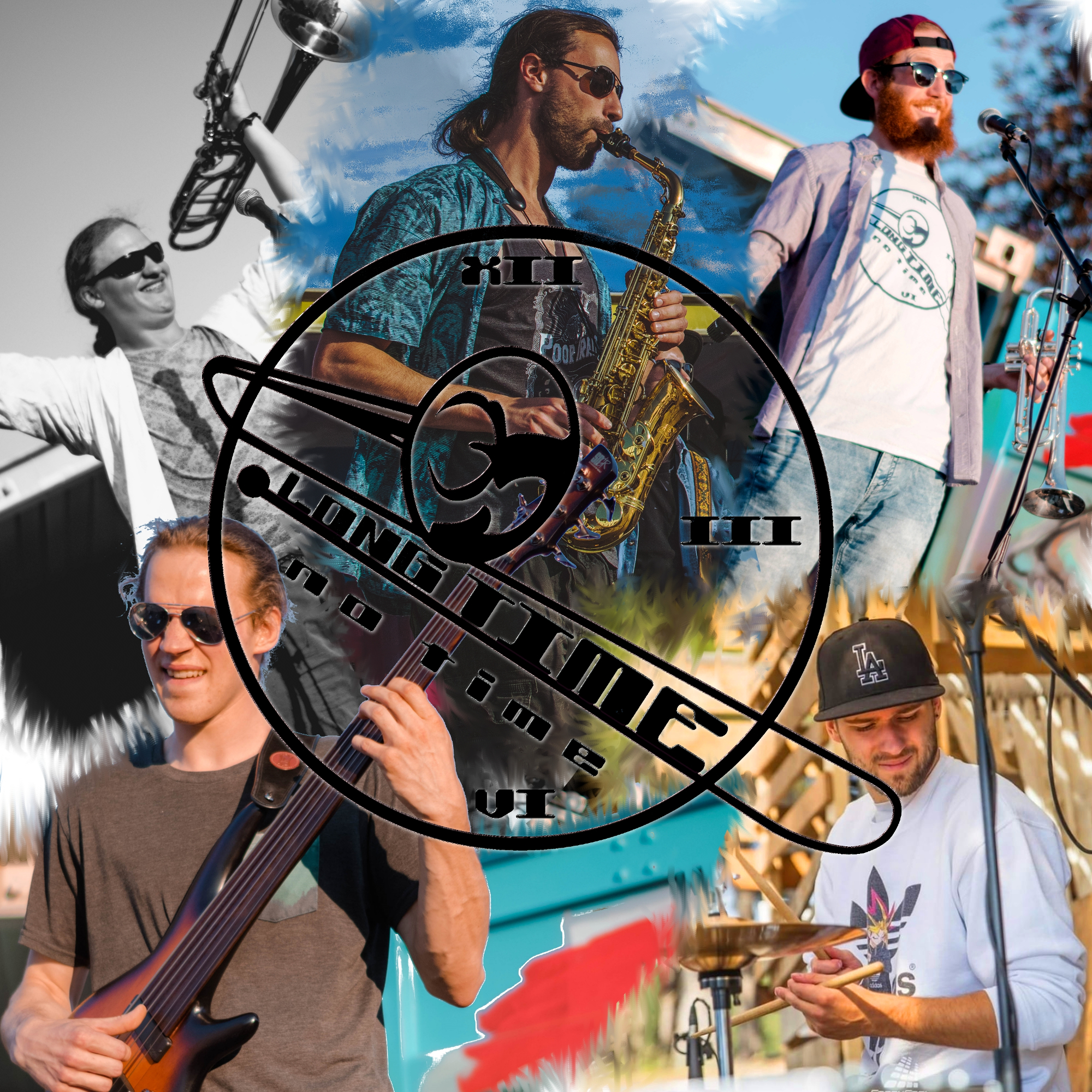 Award-winning Calgarian horn band Long Time No Time is a musical force unlike anything audiences have heard before. Formed in 2017 as an amalgamation of music school nerds from the University of Calgary looking to find mainstream outlets, LTNT merges intense musicality with hard-rocking grooves that are guaranteed to get even stodgiest party goer up on their feet. Featuring frontman/composer Daniel Pelton on saxophone, Andrew Leitch on trumpet, Thomas Dundas on bass trombone, Jesse Schwarz on electric bass, and Fletcher Dahlman on drums – the group’s unique instrumentation draws almost as much attention as their music.

Colloquially referred to as “Calgary’s own Cat Empire,” LTNT is known for putting on raucous shows that appeal to audiences from all walks of life. University profs, punks, ravers, rockers, and even orchestral musicians all come together when LTNT takes the stage.

Riding the success of their debut album “First Time Full Time” in June 2018, LTNT has rocked stages across Western Canada including Bermuda Shorts Day, FozzyFest, the National Music Centre at Studio Bell, BIG Winter Classic, and more. Their follow-up single “Hellephant” won them a Best Independent Canadian Music Video Award, as well as collaborative opportunities with Calgary FanExpo, Calgary Public Libraries, Canadian Country Music Week, CJSW 90.9FM, and other Canadian organizations. Their sophomore album “Next Time” was released to great local acclaim in January 2020 and set the stage for what was to come next.

On May 15th, 2020, LTNT released their first live album “Big Time (Live at the National Music Centre)” in collaboration with the University of Calgary Jazz Orchestra. Between LTNT and the UCJO, nearly 30 musicians rock the stage in a one-and-a-half-hour performance of entirely original compositions. You can hear the audience thoroughly enjoying themselves as the two groups share the stage, building energy throughout the performance. Classic LTNT tunes finally get the live energy they deserve on this record, with all the quirks and fresh twists audiences have come to expect from the group.

On January 15th, 2021, LTNT dropped the first single from their upcoming album “Tough Times.” The rest of the album is expected in March or April.

LTNT is a unique group that promises fun and engaging music for all who care to listen. Categorically ubiquitous, audiences will find themselves steadily surprised by what comes next, the only constant being that no one will be standing still.