CMW Wants to Send Your Band to Play Culture Collide 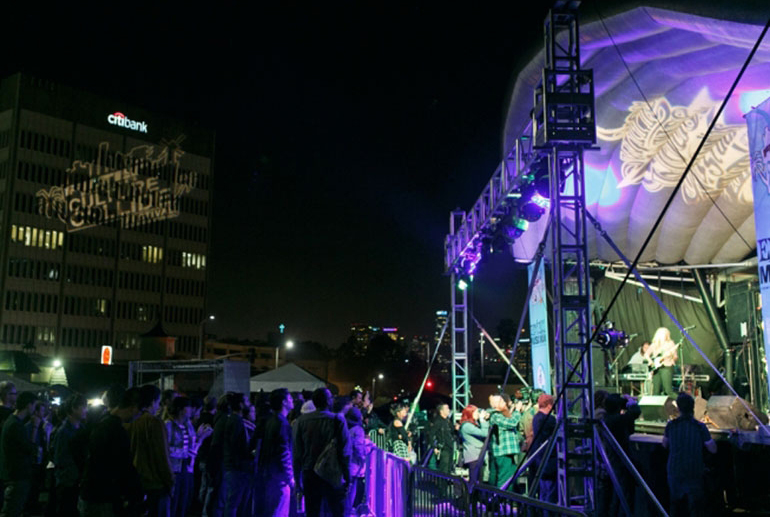 A unique opportunity for all Canadian Artists – known or unknown!

Record a live show with the Set.fm studio or simply upload one of your already recorded live sets and you could be going to Los Angeles & San Francisco to play alongside dozens of amazing bands from all corners of the globe.

Canadian Music Week is proud to be a part of this initiative and is making this opportunity available to YOU! If you are interested in performing, submit your live track at set.fm/culturecollide for consideration.

Already a BandPage artist? Put your submission in the fastlane by using your BandPage connect profile to complete your registration!

This is a unique and unprecedented showcase opportunity. Set.fm is contributing $2,000 to each of the selected bands. Artists will be responsible for their own travel expenses and accommodations drawing from this contribution unless otherwise notified by Culture Collide that they have been selected for additional funding.

In addition to performing at Culture Collide, prize highlights include:

2013 Culture Collide Festival in Los Angeles attracted over 15,000 attendees. Its success was over the top! This year it’s Onwards & Upwards to San Francisco as well! Culture Collide, celebrating its 5th year, brings forth freedom of creative expression and discovery that all true music fans expect.

Culture Collide Festival’s 2014 first round of bands includes Cloud Nothings, Nina Persson, Quantic, Until The Ribbon Breaks, PINS, Go Back To The Zoo, Beat Connection, and many, many more.

Culture Collide’s Twin Festival’s are International and welcome artists from over 25 countries, bringing their unique perspectives on music and culture to San Francisco’s Historic Mission District and LA’s East Side for a musical melting pot of live performances, film screenings, and happy hours featuring food and drink from around the world. Each participating country will aim to bring two of its artists to Los Angeles to partner up with an established American band for their showcase’s. Our select American bands, will act as ambassadors throughout the festival and take the international artists under their wings to share information about performing in America and Canada and compare notes, write songs and generally create!  CultureCollide.com | CultureCollide.com/Festivals

Now in its 33rd year, CMW is recognized as one of the premier entertainment events in North America and beyond focusing on the business of music & the music itself. CMW brings together Live, Sound Recording, New Media and Broadcast for one spectacular week of events combining informative intensive conferences, cutting edge trade exhibition, award shows, film festival and Canada’s biggest New Music Festival. The CMW festival spans 8 nights of performances, with 1,000 showcasing bands at more than 60 live music venues in the entertainment district of downtown Toronto. www.cmw.net

Set.fm is built by music lovers for music lovers.  We got tired of seeing our favorite bands struggle to make it from gig to gig. We wanted a way to support the artists even after the house lights came up.  Set.fm helps artists produce amazing, live recordings and get them in the hands of fans immediately after the show. This means more fans and more money from each show.  Over the long haul, this means more live music. To date, thousands of artists have used Set.fm to record shows in hundreds of venues worldwide.. And that’s why we’re here. Set.fm is proudly based in the live music capital of the world, Austin, Texas. Set.fm

BandPage is the platform more than 500,000 musicians use as their central online profile to reach, engage and monetize hundreds of millions of fans across the largest music services in the world. The BandPage Network powers musicians’ content and stores across Clear Channel, Google, VEVO, Live Nation, Xbox Music, Rhapsody, LyricFind, Rdio and more. Musicians can set up their BandPage Profile for free, which includes their music, tour dates, photos, bios, videos and store at: www.BandPage.com.

SOCAN is a member-based and governed organization that represents the Canadian performing rights of more than three-million Canadian and international music creators and publishers. SOCAN is proud to play a leading role in supporting the long-term success of its more than 120,000 Canadian members, and the Canadian music industry overall. SOCAN licenses more than 125,000 businesses in Canada, and distributes royalties to its members and music rights organizations around the world. SOCAN also distributes royalties to its members for the use of their music internationally in collaboration with its peer societies. www.socan.ca

Slaight Music was started by Gary Slaight and Derrick Ross in 2011 with a mandate to support the Canadian music community through a variety of initiatives, and to develop Canadian talent via strategic partnerships with industry peers. We work with artists from across the country and across the musical spectrum, helping to further careers and get great music heard. We’re also invested in the technology sphere, helping Canadian music entrepreneurs develop the next generation of digital platforms and services. And we support a variety of music-related events, causes and charities.